OBSERVATORY ON EUROPEAN STUDIES_ EU-NATO cooperation: a glimpse at the role of Eastern EU Members for keeping stability in Europe 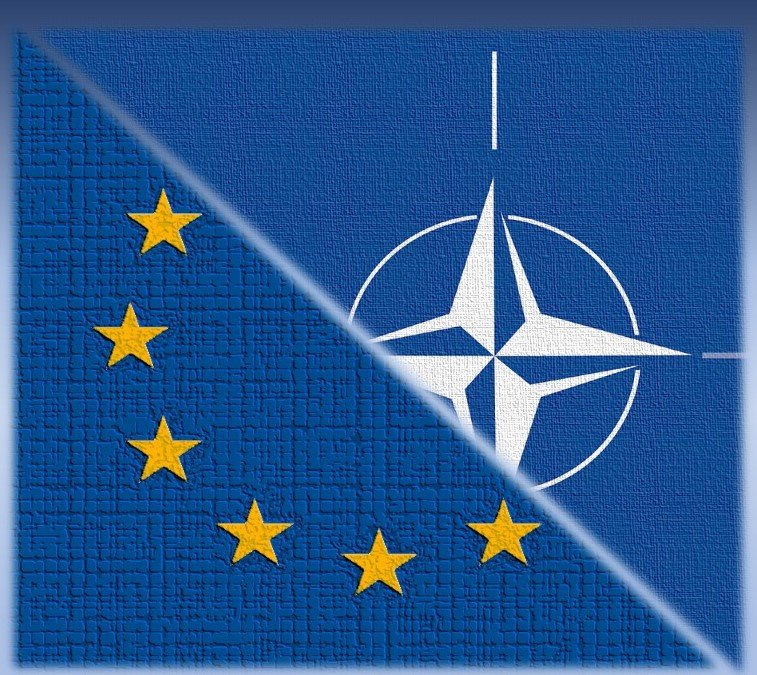 Officially founded in 1949 by the Washington Treaty, with the aim at standing up for the Western world against the ascension of a new threat, the communism, NATO (North Atlantic Treaty Organization) has seen its role increase in the last decade. During the Cold War, NATO had the essential role of protecting the Western world against the attempts of the Soviet Union to take control over key-territories in Europe. After the Cold War and the fall of the Soviet Union, its works had to be redirected towards new threats such as terrorism, civil wars in the Middle East, and other punctual threats emerged from the end of bipolarization and rising of nationalism in many parts of the world.

Nowadays, it has an increasingly high role again to defend Europe from Eastern threats, but this time anew coming from the former Soviet Union country, Russia. The foreseen scenario indicates that Europe is again on the brink of new geopolitical risks, and it must fend off potential threats coming from its big Eurasian neighbor. Hence, a key issue is the cooperation between the European Union and NATO, giving a special role to Eastern EU members, like Poland, Romania and the Baltic countries.
The relations between NATO and the EU began in the 90s, and were institutionalized in the early 2000s, following the 2002 NATO-EU Declaration of a European Security and Defense Policy (ESDP) and the 2003 ‚ÄúBerlin Plus‚Äù arrangements. Composed of 21 EU countries, NATO members can all together mobilize a range of defensive tools to enhance its security response. In 2016, the European Council, the President of the European Commission and the Secretary General to NATO signed a joint Declaration in Warsaw envisioning to foster the EU-NATO strategic partnership. It depicted seven areas of cooperation between the two organizations, which were: 1. countering hybrid threats; 2. operational cooperation including at sea and on migration; 3. cyber security and defense; 4. defense capabilities; 5. defense industry and research; 6. exercises; 7. supporting Eastern and Southern partners‚Äô capacity-building efforts. As an outcome, 74 concrete actions are under implementation. 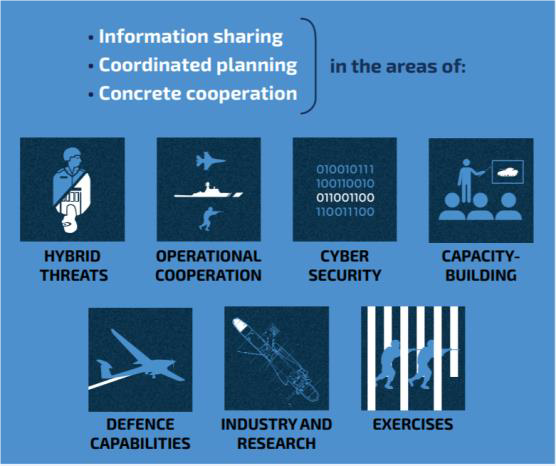 The main principles that guide this cooperation are: ‚Äú[‚Ä¶] openness,
transparency, inclusiveness and reciprocity, in full respect of the decision-making autonomy and procedures of both organizations without prejudice to the specific character of the security and defense policy of any Member State.‚Äù(EEAS. EU-NATO cooperation ‚Äì Factsheets. Bruxelles. 2020. Available ate:
https://eeas.europa.eu/headquarters/headquarters-homepage_en/28286/EU-NATO%20cooperation%20-%20Factsheets. Acess on: 14 Jan. 2021.) Furthermore, this relationship is vital to develop a ‚Äòcomprehensive approach‚Äô to crisis management and operations, which requires the effective application of both military and civilian means.(NATO. Relations with the European Union. Jul. 2020. Available at: https://www.nato.int/cps/en/natohq/topics_49217.htm. Access on: 14 Jan. 2021.)

Bearing this in mind, it is important to notice how the Eastern region has one of
the central roles for this cooperation. Although the ‚ÄúCapacity-building‚Äù mentions non-
EU-member Eastern countries, such as Ukraine, Georgia, and Moldova, the entire
Eastern region of Europe plays a vital role. Inasmuch as they are located in a
geostrategic position, between East and West, active participation of Poland, Bulgaria,
Hungary, Romania, for instance, is decisive to build a security region in the continent.
As it is known, NATO forces are consisted of Allies‚Äô troops, which combine
their action against a common enemy, and, in April 2020, Exercise DEFENDEREurope
2020, a U.S.-led multinational exercise, including NATO‚Äôs participation,
debuted its activities. It was the largest so far deployment of U.S.-based forces to
Europe after more than two decades, with 20,000 soldiers deployed directly from the
U.S. to Europe, or the third-largest military exercise in Europe since the Cold War.
More importantly, the areas for drilling were located in Germany and Poland.
On July 16, 2020, Soldiers arrived in Poznan, Poland. The Fort Hood-based unit,
from Texas, was on ground to take part of Defender Europe 2020 Phase II at Drawsko
Pomorskie Training Area, Poland. Around 6,000 U.S. and Polish soldiers participated in
the joint training. The aim was interact with Polish-NATO Allies and conduct gunneries
and live fire exercises at various lower echelons to enhance the fighting capabilities.
This was a demonstration of the U.S. Army‚Äôs capability to rapidly deploy forces,
especially to Ally regions.
Another joint action, Exercise Saber Junction 20, took place in Germany and it
counted with the participation of another eight Allies‚Äô forces, which were Albania,Georgia, Latvia, Lithuania, Moldova, North Macedonia, Romania and Ukraine. Not all of them are EU-member states, nonetheless those are countries situated inside the former ‚Äòiron curtain‚Äô, which demonstrates major concerns over potential menaces coming from the East.
This importance given to Eastern Europe can be perceived after the 2015 meeting of all the defense ministers of NATO members at the organization‚Äôs headquarter, where they have decided to double combat forces in the region, in order to face off Russia. It is possible to see this movement in the map below. 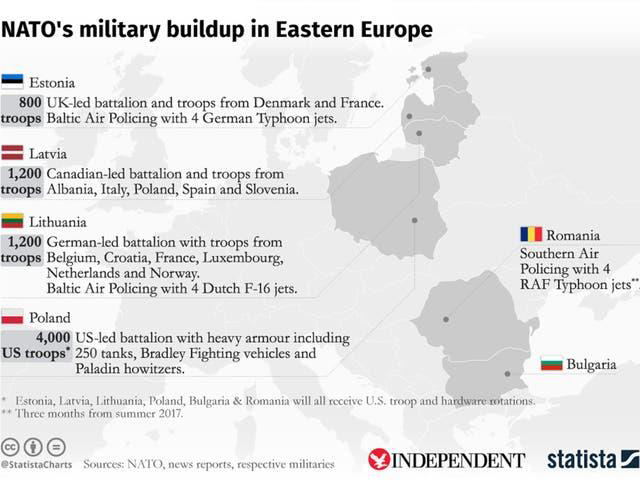 Picture 2
Source: INDEPENDENT. The map that shows how many NATO troops are deployed along Russia‚Äôs border. Available at: https://www.independent.co.uk/news/world/europe/russia-nato-border-forces-map-where-are-they-positioned-a7562391.html 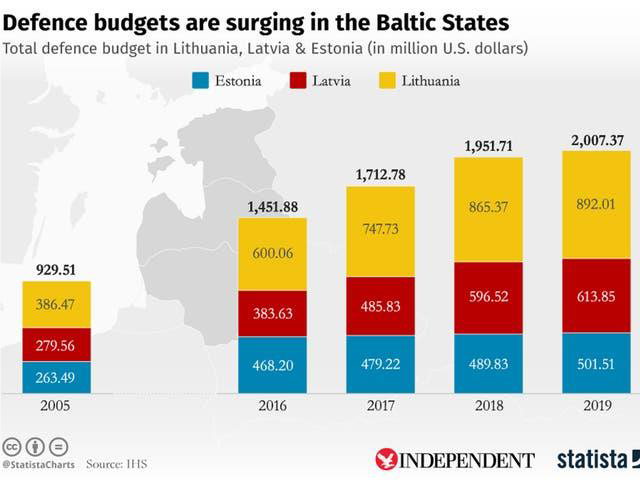 Picture 3
Source: INDEPENDENT. The map that shows how many NATO troops are deployed along Russia‚Äôs border. Available at: https://www.independent.co.uk/news/world/europe/russia-nato-border-forces-map-where-are-they-positioned-a7562391.html

Poland merits spotlights, insofar as it has the biggest battalion, with its 4,000 U.S. troops and heavy weaponry, while former Soviet states also have hundreds of troops deployed along Russia, Ukraine and Belarus‚Äôs borders. Defense budget has also spiked for Baltic States, around one hundred per cent since 2005.
This only points out the high importance conferred to the deep cooperation for security between EU and NATO, especially after the Civil War in Syria in 2011 and the annexation of Ukraine‚Äôs Crimea by Russia in 2014.
This is a critical point. By annexing Crimea, Russia got what has always been the object of lasciviousness of Russian tsars: the exit to warm waters in the Mediterranean. Not in vain, has Europe tried to ward off their hands from European waters and region.
Not only Russian presence figures as a threat to the stability of the EU and of Europe as a whole, but also its presence on cyber environment with disinformation campaigns. Hence, building up a strong infrastructure on NATO‚Äôs ‚ÄòEastern Flank‚Äô is crucial ‚Äì a region which functions as a cordon sanitaire, and which can be guarded by Russia with the Open Skies Treaty for example. Putin‚Äôs Russia desire to take back the control over Eastern European countries, a strategic geopolitical region. With this in mind, all of East European NATO Allies have increases spending on defense, as shown above.
Therefore, the role of Eastern EU-members can be deemed of major importance to the EU stability. Take the case of Poland, which host several U.S. and NATO military bases, some of them very close to the Russian territory of Kaliningrad. Relations between U.S. and Poland are extremely close, and the former grants security assistance to the latter so it can meet its NATO obligations. As part of the close cooperation, Poland hosts U.S. troops via the European Deterrence Initiative (EDI), besides it has signed a US$4.75 bi letter of acceptance to purchase the Patriot air and missile defense system in 2018, becoming the largest military procurement. Likewise, in 2020, it signed a contract to purchase 32-F35 fighter jets from American partners.
Still on Eastern EU members, Romania is getting visible attention from U.S. and NATO. As part of USEUCOM (U.S. European Command), the EU member has increasingly received missions over years, and its Mihail Kogalniceau Air Base has been being used primarily by U.S. Army Europe and rotational ground forces. Notwithstanding that position, the Pentagon is essaying to push through the Congress the National Defense Authorization Act of 2021, which includes US$130.5 million to renovate Campia Turzii Air Base in central Romania, a place that could be strategic to move forces to deter Russian aggression.
In a nutshell, Eastern EU members could still be deemed as cordon sanitaire, or rather a somehow buffer zone, splitting Europe into West, where most EU-countries are
located, and East, mostly dominated by Russia meddling and influence, following, to a certain extent, the contour of the Cold War territorial division. As ‚Äòmother Russia‚Äô hovers over Eastern Europe, NATO and its EU Allies are in a hurry to prop up defenses on the ‚ÄòEastern Flank‚Äô. Building up strong defensive structures can help to achieve stability and deter Russia‚Äôs attempt to dominate the region, especially after the annexation of Crimea in 2014. Hence, the participation of the Baltic countries, Poland, Romania, and others are of vital importance to NATO, EU and the rest of the world.