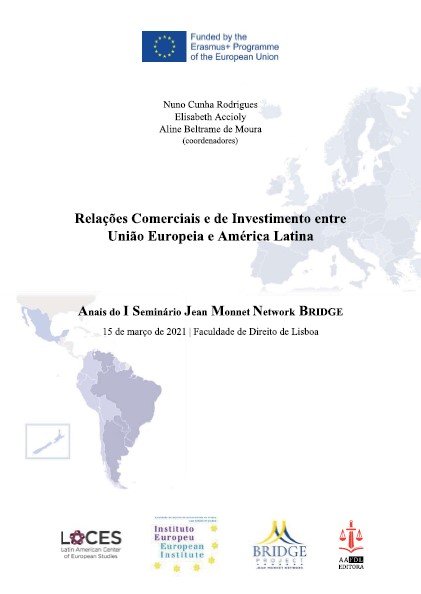 The collection of assignments presented here is the result of the I Workshop Jean Monnet Network – BRIDGE on “Commercial and investment relations between the European Union and Latin America” which took place on March 15, 2021, in virtual mode, at the European Institute of the Faculty of Law of the University of Lisbon. This initiative promoted an intense debate on the theoretical and practical aspects of partnerships between the European Union and Latin American countries in the sector of international trade and foreign investment, with the presence of professors and researchers from several universities.

The proceedings are part of the activities developed by the Cátedra Jean Monnet coordinated by Professor Nuno Cunha Rodrigues and by the Jean Monnet Network project called “Building Rights and Developing Knowledge between the European Union and Latin America – BRIDGE”, co-financed by the Erasmus+ Program of European Commission (620744-EPP-1-2020-1-BR-EPPJMO-NETWORK), coordinated by Professor Aline Beltrame de Moura.

The articles presented at the Workshop were previously evaluated through Call for Papers, launched in November 2020, and selected by the Organizing Committee composed of Professors Nuno Cunha Rodrigues (University of Lisbon), Elizabeth Accioly (European University of Lisbon) and Aline Beltrame de Moura (Federal University of Santa Catarina). Part of the articles selected for presentation at the Workshop were published in Anais do I Seminário Jean Monnet Network BRIDGE (PDF archive) and the others in the I edition of the Latin American Journal of European Studies (2021-1).