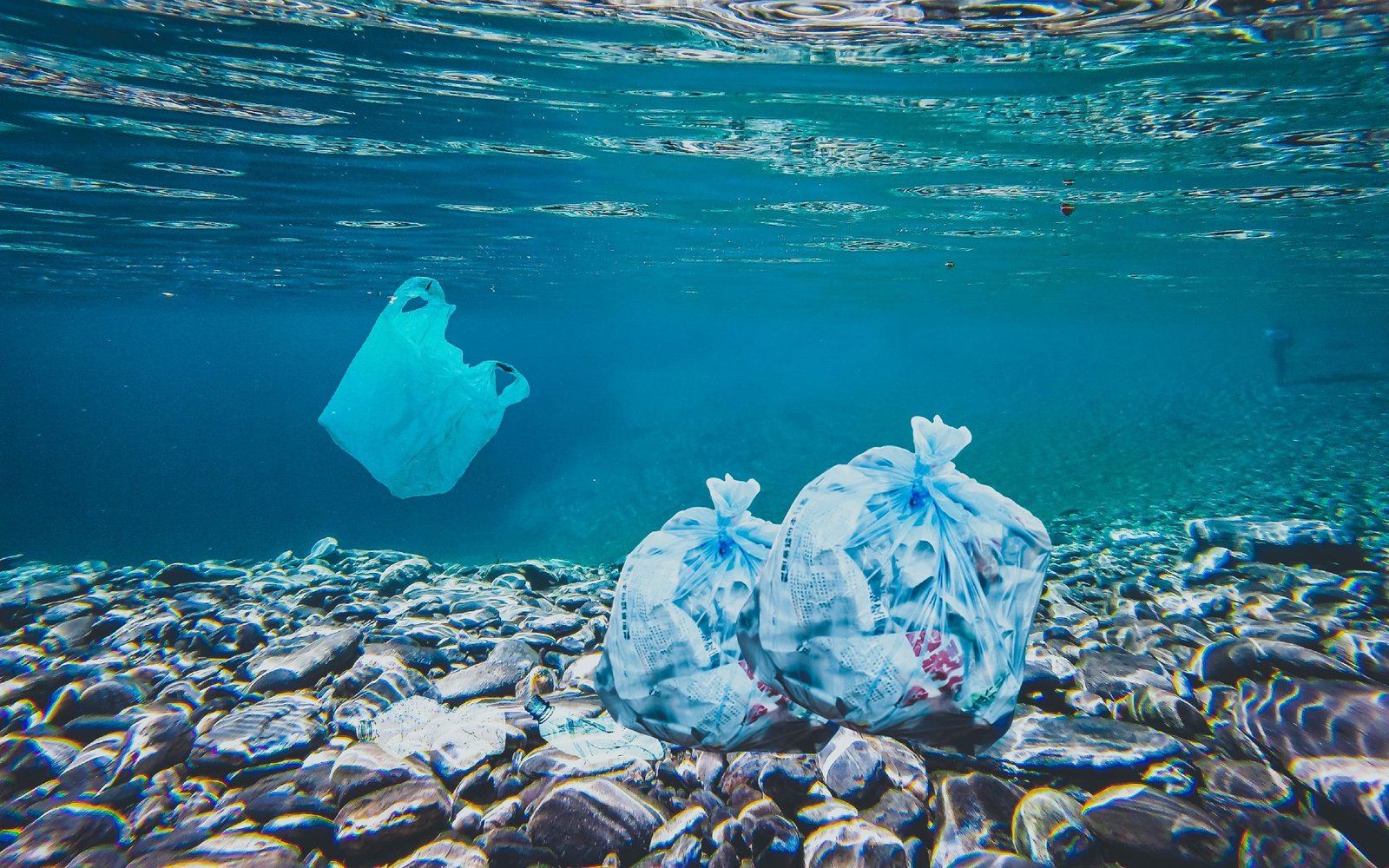 Plastics can generally be described as a group of synthetic materials used in a wide and growing range of applications, which have been incorporated into people‚Äôs daily lives with surprising speed. There are, however, many current challenges concerning plastics, mainly because these products, although commonly linked to benefits such as convenience and hygiene, do not exist in a vacuum or in isolation, but as part of a global chain of trade that impacts human beings, natural resources, and ecosystems.[1] So, to really address all aspects regarding them, it is necessary to establish what plastics are with the help of studies from the environmental sciences such as biology.

They can be understood as objects consisting of synthetic or natural polymers that essentially have been heavily modified and that, when present in natural environments without complying with an intended function, are solid and insoluble at 20¬įC.[2] Plastics are inputs made from organic polymers, formed by linking long chains of monomers, which are products of a supply chain that often starts at an oil rig or a coal mine. It means that more than 99% of plastics are produced from chemicals from fossil fuels.[3]

This characterization and description of plastics is important and, for this sort of analysis, can be transported to the juridical field, once the legal description of plastics still lacks definitiveness, being only possible to use interdisciplinarity to reach a feasible notion of these materials. Aware of the particularities of plastics, it is substantial to examine how plastics, when discarded, become a part of an ecosystem flow between the air and the oceans, traveling across the planet.[4] ¬†

Marine plastic pollution is a form of pollution of the marine environment, being inevitably a transboundary phenomenon and even being framed in the concept of environmental disaster[5] that goes beyond borders, considering that it is estimated that between 4.4 to 12.7 million metric tons of plastic are added to the oceans annually, and this waste is not restricted to national borders, but migrates via water and air currents.[6]

The presence of these materials in the oceans represents exponential growth and the ability to harm ecosystems, which directly interferes with a healthy quality of life for humans and other beings.[7] The effects of plastic pollution on marine biodiversity and on ecosystem services provided by the seas demonstrate another aspect of this pollution, which is related to the economic costs of the presence of these wastes in the environment, especially regarding marine natural capital.[8]

The management of plastic residues, thus, is essential, notably because they are commonly disposed after a single use, but still might cause a series of damage to human health and to the balance of the environment. It is not even possible to accurately assess the level of damage that the presence of plastics in their micro and nano sizes[9] can generate in the organisms of living beings, particularly in humans.[10]

In view of this scenario, it is noticed that the International Community has been mobilizing multiple sectors in order to face the challenges that society has faced in the XXI century. The implementation of the 2030 Agenda for Sustainable Development is seen as an indispensable means for the egress of adversities and crises that have intensified in recent years in different parts of the globe.[11] Within the scope of the United Nations, efforts have been endeavoured to foment awareness about the terrifying state of the seas, having proclaimed the Decade of Ocean Science for Sustainable Development (2021-2030). The Decade aims to encourage the scientific community, policy makers, the private sector and civil society to act aspiring real changes.[12]

Among the goals aimed for the Decade, there are the facilitation of the generation of data, information, and knowledge needed to move towards a more healthy, resilient, and safe ocean. One of the purposes of this mission is to achieve clean seas where sources of pollution can be identified and reduced or removed.[13] The Decade of the Oceans[14] highlights the prominent place intended for marine protection at all levels. The ocean is so central to achieving sustainable development in the future, starting from the present, that it is time to draw a new narrative for the seas, placing the oceans as the centre of human life.[15]

In this action taking circumstance, the European Union has demonstrated, since 2015, that it is turning attentions to the circular economy, having identified plastics as a major management priority.[16] In 2017, the European Commission expressly manifested an interest in investing in an intelligent, innovative, and sustainable industry, adopting renewed industrial practices within the EU, as well as a strategy to move towards a circular economy in the field of plastics.[17]

More recently, in accordance with the environmental and climate objectives of the European Union and recognising that the ocean is the main climate regulator in the world, the Commission has adopted a new approach for a sustainable blue economy. In the document, the Commission engages into acting not only within the union, but also abroad, committing to lead efforts to reach a global agreement on plastics and to promote the uptake of the circular economy approach on plastics, which would lay the basis for a more consolidated and coordinated response to plastic pollution at a global level.[18] This action, more than indispensable, is original, once it proposes filling a considerable gap in international regulations.

These policies related to the environment are a shared competence between the Union and its Member States, which have the primary responsibility for the protection of the environment, but by reasons of scale or effects of the suggested actions, they might be better achieved at European Union level.[19] Howsoever, Member States may maintain or introduce more rigorous protective measures, if they are compatible with the union treaties and are notified to the Commission.[20]

The Parliament, in 2019, has established through the Directive (EU) 2019/904 that Member States had until 3 July 2021 to bring into force the laws, regulations and administrative provisions necessary to comply with the document, which has the object of preventing and reducing the impact of certain plastic products on the environment, in particular the aquatic.[21] They have until 2024 to implement providences related to product design requirements for bottles and the extended producer responsibility,[22] for example.

It is clear that there is a long path to go through in this journey of reframing and reducing plastics in general, being important to monitor the development of the next measures and decisions to be taken from the local to the international scale. Interventions such as the implementation of the plastic tax are significant, especially to observe how industry and consumers will adapt to reduce the production and the consumption of single-use plastic, through technology innovation and production conversion. The companies most inclined to innovation will record cost reductions whenever they are able to reduce the amount of single-use plastic placed on the market through their own economic activity, obtaining a competitive advantage over those who will not be able to convert.[23]

[2] N. B. Hartmann et al. Are We Speaking the Same Language? Recommendations for a Definition and Categorization Framework for Plastic Debris, p. 1045.

[5] It is worth elucidating the concept of environmental disaster, which can be seen as an event (natural, human, or mixed) capable of compromising environmental functions or harming human interests mediated by some change in the environment, in D. W. Carvalho. Bases estruturantes da pol√≠tica nacional de prote√ß√£o e defesa civil a partir de um Direito dos Desastres Ambientais, p. 13‚Äď38.

[7] The presence of microplastics in human lung tissues was already obtained at autopsies. The most frequently determined polymers found were polyethylene and polypropylene. Deleterious health outcomes may be related to the heterogeneous characteristics of these contaminants in the respiratory system following inhalation, in L. F. Amato-Louren√ßo et al. Presence of airborne microplastics in human lung tissue.

[8] In terms of quantifying the loss, it is possible to estimate that a decline of just 1% to 5% in the provision of marine ecosystem services is equivalent to an annual loss of 500 to 2,500 billion dollars in the value of the benefits derived from these services. Given that this amount includes only the impacts of marine natural capital, the total economic cost is likely to be much higher. In: N. J. Beaumont et al. Global ecological, social, and economic impacts of marine plastic, p. 189-195.

[9] Plastics can be degraded by abiotic or biotic factors such as UV radiation, mechanical action, and hydrolysis, which are fundamental in the fragmentation and availability of these materials, as well as microorganisms. Thus, the degradation process of plastics generates particles in scales, meso, micro and nano, which are classified into meso plastics, microplastics and nano plastics. Microplastics and nano plastics are the polymers with the most expressive impact on the environment, since due to their large surface areas they can adsorb highly toxic compounds. In: D. Soares Caixeta et al. Nano e Micropl√°sticos nos Ecossistemas: Impactos Ambientais e Efeitos sobre os Organismos, p. 19-34.

[12] J. Claudet et al. A Roadmap for Using the UN Decade of Ocean Science for Sustainable Development in Support of Science, Policy, and Action, p. 34-42.

[15] J. Claudet et al. A Roadmap for Using the UN Decade of Ocean Science for Sustainable Development in Support of Science, Policy, and Action, p. 34-42.

[16] European Commission. Closing the loop - An EU Action Plan for the Circular Economy.

[17] European Commission. A European Strategy for Plastics in a Circular Economy.

[18] European Commission. A new approach for a sustainable blue economy in the EU Transforming the EU‚Äôs Blue Economy for a Sustainable Future, p. 19.

[21] European Union. Directive (EU) 2019/904 of the European Parliament and of the Council of 5 June 2019 on the reduction of the impact of certain plastic products on the environment.

[22] European Union. Directive (EU) 2019/904 of the European Parliament and of the Council of 5 June 2019 on the reduction of the impact of certain plastic products on the environment.

Researcher of the Research Group on Law and International Affairs (GEDAI).

Coordinator of the Research Group on Law and International Affairs (GEDAI).