Observatory on European Studies _ Belarus‚Äô intervention on forced landing and the EU: how to react to an international law violation? 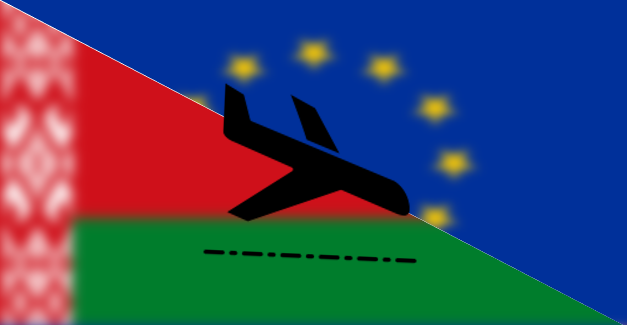 On May 23 of 2021, Roman Protasevich, a journalist and well-known critic of Lukashenko‚Äôs regime and his girlfriend Sof√≠a Sapega, a law student, were traveling from Athens, Greece to Vilnius, Lithuania. Suddenly, their plans changed. Two KGB members that were on board allegedly reported ‚Äòa bomb‚Äô and forced the landing of the aircraft in Minsk, Belarus, even though they were already closer to Vilnius. In order to protect 171 passengers, the Ryanair Flight FR4978, escorted by an MiG-29, was diverted and landed in Minsk National Airport. After five hours searching for the bomb nothing was found and the plane was free to go. Nonetheless, without both Protasevich and Sapega, who were captured as terrorists. According to the BBC, the situation was just a stunt to imprison him, but it definitely affected other passengers while challenging both human rights law and international law.

Given the current situation within Belarus concerning human rights violations and persecution of non-governmental organizations, independent journalists, and opposition politicians, the forced landing of the plane raised international concern in the EU and abroad. First, because passengers' right to freedom of movement was ‚Äòviolated‚Äô several ways. Although Belarusian authorities may have had an arrest warrant against Protasevich, they did not have jurisdiction over the other 169 civilians on the plane, who had to remain for hours against their will in a country different from that of their original destination. Second, this incident is also setting a precedent for the security and integrity of government dissidents traveling over the airspace of Eastern Europe, since they can no longer have guarantees about their rights. Along those lines, ¬ÝUN Secretary-General, Ant√≥nio Guterres, said he remained ‚Äúgreatly concerned by the deteriorating human rights situation in Belarus‚Äù in the aftermath of the elections, and urged the Belarusian authorities to fully comply with all its international obligations.

Regarding the latter, Belarus did not only violated Protasevich and Sapega‚Äôs human rights, but also breached important international law agreements. About this incident, the International Civil Aviation Organization (ICAO) manifested its concern over the Belarus‚Äôs ‚Äòaviation piracy‚Äô situation, considering the fact that it may have contravened the 1944 Chicago Convention on International Civil Aviation. Despite the fact that the Article 1 of the Convention stipulates that a State has "complete and exclusive sovereignty over the airspace above its territory" and therefore, civil aircraft are subject to the full jurisdiction of that State when overflying it, "in case of interception, the lives of persons on board and the safety of aircraft must not be endangered" as per the Article 3 bis (a) of the Convention provides. Hence, interception and redirection of the plane could have potentially threatened the safety of both crew and passengers and rises as a breach of the treaty.

Moreover, the principal issue Belarusians face when encountering situations of human rights violations is that they have no recourse to international courts: Belarus has not signed or ratified the European Convention on Human Rights (1953), and therefore, there is no jurisdiction of the European Court of Human Rights (ECHR). In this regard, citizens are prevented from looking up to the continent‚Äôs main judicial body for rulings on alleged abuses of individuals‚Äô rights, including freedom of speech and assembly.

On the other side, Lukashenko‚Äôs regime also challenged the Convention for the suppression of unlawful acts against the safety of civil aviation, also known as the Montreal Convention of 1971. Article 1 clearly stands that the signing parties agree to ‚Äúprovide appropriate measures for punishment of offenders‚Äù to (1)‚Äúany person [who] commits an offence if he unlawfully and intentionally (e) communicates information which he knows to be false, thereby endangering the safety of an aircraft in flight‚Äù. Undoubtedly, this was the case because there‚Äôs no evidence of any source reporting a bombing attempt. Initially, KGB agents said the alleged alert was related to the current Israel and Hamas confrontation. However, by that time the situation was already under control and it is not clear why any of those actors would have sent an explosive device to Lithuania. Thus, Belarus also violated Article 10 of the Convention as they did not ‚Äútake all practicable measures for the purpose of preventing the offenses mentioned in Article 1‚Äù.

Even though Belarus was the main responsible for this interruption, this had an impact on Ryanair, the airline. Both its image and reputation are in question. Therefore, Poland (as the flag-State of the plane), Ireland (as the airline‚Äôs country of origin) and the other 184 contracting States could rise Belarus behavior at the International Court of Justice (ICJ).¬Ý However, when Belarus (then the Byelorussian Soviet Socialist Republic) endorsed the Treaty in 1973, it made a reservation on Article 14, which allows the ICJ to arbitrate in any dispute. In this sense, even if Belarus is part of the Convention, the ICJ probably has no jurisdiction over these affairs.

For that reason, in an attempt to support the Convention, specially Article 3 that says that a violation should be ‚Äúpunishable by severe penalties‚Äù, different countries and organizations have reacted and imposed sanctions. The EU Council calls for an investigation by the ICAO and demands sanctions, mainly economic ones, to Belarus and some companies that are close to the regime, such as Belaruskali. Whilst it demands the release of both Protasevich and Sapega, it fosters, along with NATO members, to avoid overflight of Belarus and prohibit their airlines to do so over the EU airspace. Those measures have already been mirrored by the UK and the G7 has announced ‚Äúfurther sanctions‚Äù.

On the contrary, Russia supports Lukashenko‚Äôs regime arguing that this has happened before by the hands of the leaders of the Liberal International Order, but nothing was said about it. Putin recalled when in 2013 a plane was stopped in Vienna, Austria because supposedly Edward Snowden, involved in the Wikileaks scandal, was on board. Even though he was not, Evo Morales, then president of Bolivia, was. As he did not follow liberal standards, that was suspicious. Another case happened in 1956 when France detained a Moroccan aircraft to arrest Algerian rebel leaders who were heading toward a conference. In this context, Lukashenko stated that Belarus will not bow to international pressure and will try to defend itself in tribunals. Additionally, the Belarussian prime minister, Roman Golovchenko, announced that they will demand reparation for the damage caused by the bans imposed over Belarus.

In conclusion, even if this case can not be classified as ‚ÄòState hijacking‚Äô, since the Hague Convention of 1971 stated that intimidation, threats or force to seize control on board is required, this intervention sets a precedent in international law. For instance, could breaking international law and several conventions allegedly be considered as intimidation under the prohibition of use of force? What could be considered a severe penalty? How long could these sanctions last? Who deserves reparation?

Considering international law is rooted in concepts of voluntarism and cooperation, enforcement of sanctions against Belarus could be difficult to pursue, mainly because of the ambiguity of these notions when facing any inter-State dispute. However, if the international community expects to avoid this kind of behavior from other States in the future, sanctions implementation will be important to reinforce any decisions or judgments made in this respect.

Nonetheless, decisions related to the subject will only be made until June 21st by the EU foreing ministers when they meet in Luxembourg.