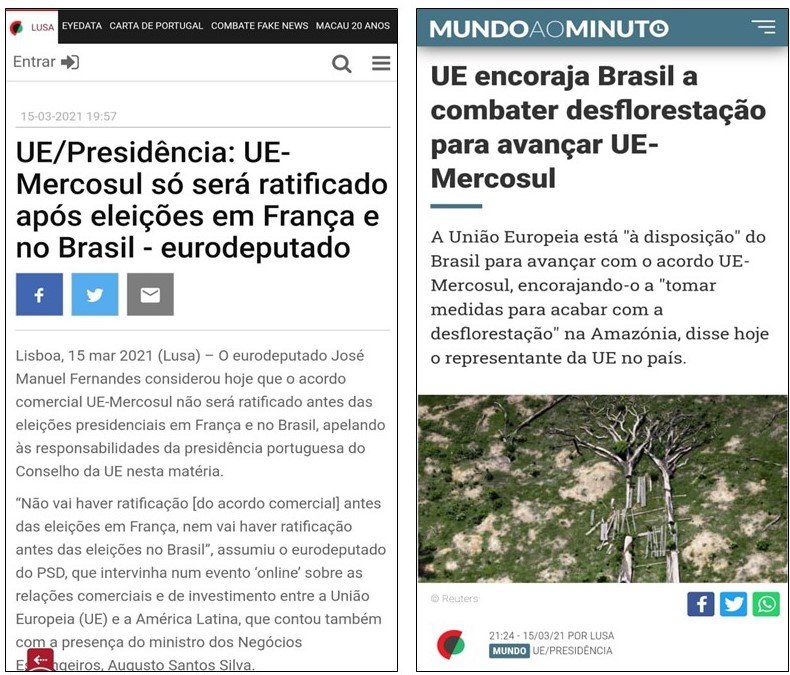 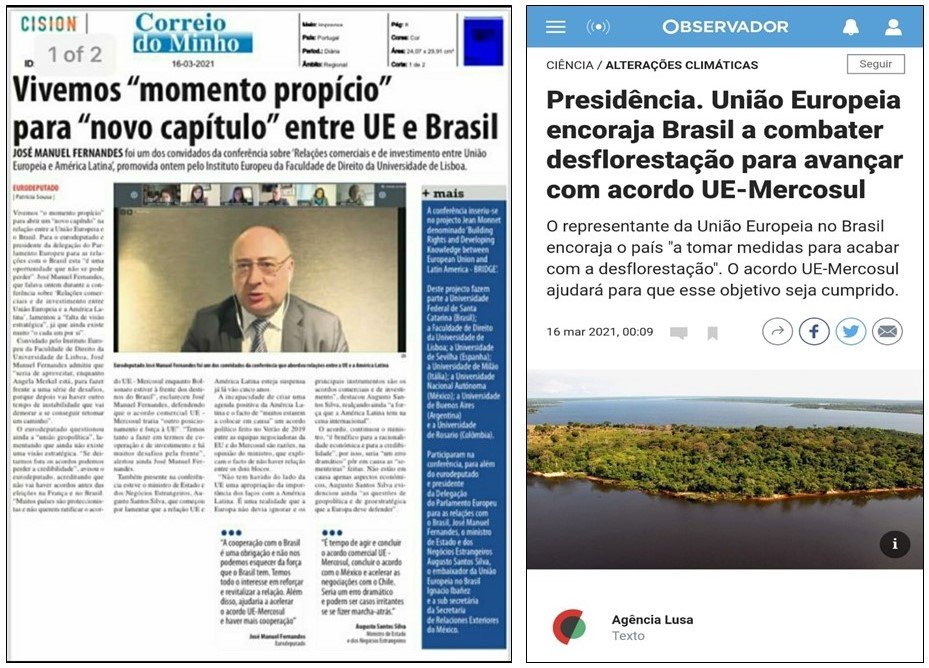 The publications: LUSA (Portugal News Agency), NotĆ­cias ao Minuto, Observador and Correio do Minho have highlighted the debates that have happened virtually during the IstĀ Ā  Jean Monnet Network ā BRIDGE Seminary on March 15th, together with the University of Lisbon School of Law European Institute, addressing the topic: "EU-Latin America trade and investment relationsā.

Portugal News Agency (LUSA) highlighted that the Member of the European Parliament JosĆ© Manuel Fernandes has stated his position that the āEU-Mercosur trade agreement will not be ratified before the presidential elections in France and Brazil, appealing to the responsibilities in this subject that Portugal has while sitting president of EU-Councilā

Otherwise, the news outlet NotĆ­cias ao Minuto highlighted the comment from EU Ambassador, Ignacio IbaĆ±ez, that the EU āwill be availableā to Brazil in order to advance the EU-Mercosur trade agreement, encouraging the country to ātake action to end deforestationā in AmazĆ“nia, underlining that the trade agreement will be based āon the premise that the trade will not take place at the expense of the environment, climate and work conditionsā.Ā

The Journal o Observador punctuated also that, in regard to AmazĆ“nia, Ignacio IbaĆ±ez has guaranteed that EU is āsureā that the EU-Mercosur trade agreement āwill be a toll that contributes to this goalā, underlining that āthe promotion of values and the defense of interests have must go hand in handā.

Correio do Minho stressed the words from the Portuguese Minister of Foreign Affairs, Augusto Santos Silva, that āthere has not been by EU side and appropriation of the importance of the bonds with Latin America. Itās a reality that Europe should not ignore, and the main tolls are the trade agreements and investmentsā highlighting still āthe power that Latin America has global sceneā.

The event featured also the deputy secretary of Foreign Relations of Mexico, Carmen Moreno Toscano, and former secretary of the Permanent Court of Review of Mercosur, Santiago Deluca.

The meeting was promoted in the scope of Project Jean Monnet Network ā BRIDGE, financed by Erasmus Program + European Commission of which participate seven Latin American and European Universities that aim to promote incentives that build bridges of dialogue and exchange of good practices between regions.

Links for the news: