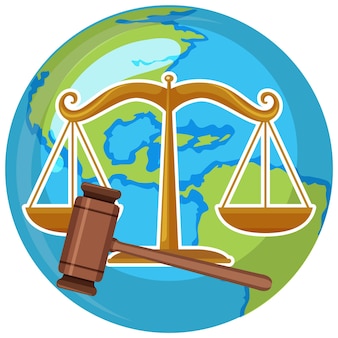 Environmental protection and sustainable development have been a recurring subject in Brazil's domestic and foreign policy, especially since the 1990s. It is important to highlight that in 1992, the city of Rio de Janeiro hosted the United Nations Conference on Environment and Development and, twenty years later, hosted the United Nations Conference on Sustainable Development. Ever since, the country has had an important voice on international fora, expressing its position on the correlation between the global south, environmental protection and sustainable development. Suffice to say that it is part of the main environmental international regimes ever since its democratization. Nevertheless, some international actors have been calling Brazil‚Äôs attention to the need of compliance with established standards.

The major issue those actors have thrown a light upon in regard to the protection of the Amazon rainforest is not whether Brazil has an updated and comprehensive legislation on the matter, but how it monitors and enforces it. This role, according to article 84 of the federal Constitution, relies on the Executive Branch. Checks and balances, in this sense, have played an important role on supervision and control of Executive Branch acts. To that matter, for instance, the Brazilian Supreme Court (STF) presides over direct actions of unconstitutionality and declaratory actions of constitutionality of federal or state laws or normative acts (as per article 102). This ¬†jurisdictional power is relevant to assure that all international and national obligations¬† are being respected in light of ¬†the Constitution, therefore, in light of article 225, that states ‚ÄúEveryone has the right to an ecologically balanced environment, which is an asset of common use and essential to a healthy quality of life, and both government and community shall have the duty to defend and preserve it for present and future generations‚ÄĚ.

An important step towards assuring the correct implementation of environmental obligations was recently taken by the Brazilian Supreme Court, that issued an historical judgment, in line with the most recent international standards of the universal system (Human Rights Council resolutions 46/7 of 23 March 2021 and 48/13 of 8 October 2021 and United Nations General Assembly resolution 76/300 of 28 July 2022), precedents of the inter-American regional system (Case of The Xucuru Indigenous People and its Members v. Brazil, Case of the Indigenous Communities of the Lhaka Honhat Association v. Argentina, Case of Kawas-Fern√°ndez v. Honduras, and Advisory Opinion OC-23/17 of November 15, 2017) and its own precedents (ADI N¬ļ 4.066 and RE 466.343).

On 1 July 2022, the Supreme Court issued a judgment on the Action Against a Violation of a Constitutional Fundamental Right (ADPF) N¬ļ 708, in regard to the fundamental right to a healthy environment. It elevates the status of environmental treaties within Brazilian legal system from the same level of national ordinary legislation to a higher level (called supra-legal) and, in some cases, to the same level of constitutional provisions. ¬†

ADPF N¬ļ 708 on the Climate Fund Case main subject was the adoption of measures to mitigate climate change and the rights stated on article 225 of the Brazilian Constitution. The judgment creates a precedent by stating that the duty to protect the environment and combat climate change is constitutional, supra-legal and legal (para. 4).

According to the Opinion of Justice Rapporteur Roberto Barroso, as the Constitution recognizes the supra-legal status of international treaties on human rights to which Brazil is a party (as decided by the Court on RE 466.343), the same is applicable to the environmental treaties, on account of the fact that they constitute a category of human rights treaties (para.17).

The Concurring Opinion of Justice √Čdson Fachin affirms that the ‚Äúright to the environment is a true fundamental right‚ÄĚ to which article five paragraph two of Brazilian Constitution is applicable. The aforementioned constitutional provision recognizes that the rights and guarantees it establishes do not exclude others deriving from international treaties to which Brazil is a party. In order to strengthen his argument on the national obligation to protect human rights and the environment, Justice Fachin mentions the ICHR Advisory Opinion OC-23/17, that determines States obligation to prevent significant environmental damage within or outside their territory.

¬†To put it in a nutshell, for the Brazilian legal system, environmental treaties now hold the same status as international human rights treaties, which is above all other legislation (except the Constitution) and other international treaties. Moreover, if the environmental treaty is approved by both Houses of the National Congress, in two different voting sessions, by vote of three-fifths of their respective members, it shall be equivalent to a Constitutional Amendment (see article 5 paragraph 3 of Brazilian Constitution), holding, thus, the same status as other Brazilian constitutional provisions. The Kelsen Pyramid has changed from image 01 to image 02, as shown below. 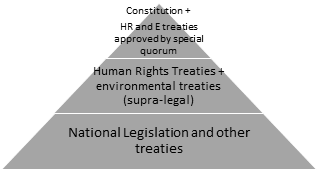 The importance of this judgment also lies on the fact that all judges shall exercise ex officio the control of conventionality (see Case of Almonacid-Arellano et al v. Chile, paragraph 124; ICHR, 2021; STJ, 2021) of acts in conflict with Inter-American human rights treaties ¬†in light of Inter-American Court of Human Rights jurisprudence. After this Supreme Court judgment on ADPF N¬ļ 708, it shall include a new set of environmental inter-American standards.

Going further, it is possible to assert that in a conflict between a constitutional provision and a provision of a treaty approved by this special constitutional quorum (i.e. both holding the same status), the Supreme Court may rule in a case the application of the latter instead of the former.

It is crucial to acknowledge that this judgment has critical repercussions for Brazil‚Äôs foreign relations, on account of the fact that all environmental treaties are now justiciable under national courts with either constitutional or supra-legal status.

Finally, in regard to the EU-Mercosur relations, it is important to note that all environmental agreements mentioned at the Trade and Sustainable Development Chapter of the EU-Mercosur Association Agreement (such as the Paris Agreement, the United Nations Framework Convention on Climate Change ‚Äď UNFCCC, the Convention on Biological Diversity ‚Äď CBD, the Convention on International Trade in Endangered Species of Wild Fauna and Flora ‚Äď CITES, the International Treaty on Plant Genetic Resources for Food and Agriculture, and the UN Convention on the Law of the Sea of 1982) hold this special status in Brazil. It is an important display of how the latest international standards in respect to recognizing environmental rights as human rights were met by the Supreme Court on this ADPF.

* Note: The idea of writing this blog post came after Professor Sebastien Duyck mentioned the Climate Fund Case on his lecture at the Training Course on Protecting Human Rights and the Environment at the Geneva Academy of International Humanitarian Law and Human Rights, organized by Professor Ludovica Chiussi Curzi.

BRAZIL. Constitution of the Federative Republic of Brazil. Available at: https://www.stf.jus.br/arquivo/cms/legislacaoConstituicao/anexo/brazil_federal_constitution.pdf

ICHR. Case of the Indigenous Communities of the Lhaka Honhat (Our Land) Association v. Argentina. Judgment of February 6, 2022. Available at: https://www.corteidh.or.cr/docs/casos/articulos/seriec_400_ing.pdf

ICHR. The Environment and Human Rights (State obligations in relation to the environment in the context of the protection and guarantee of the rights to life and to personal integrity ‚Äď interpretation and scope of Articles 4(1) and 5(1) of the American Convention on Human Rights). Advisory Opinion OC-23/17 of November 15, 2017. Series A No. 23. Available at: https://www.corteidh.or.cr/docs/opiniones/seriea_23_esp.pdf

Visiting Research Fellow at Institut Barcelona d'Estudis Internacionals (IBEI) in 2022. PhD and Master in Social Sciences from the Research and Postgraduate Center on the Americas of the University of Bras√≠lia (CEPPAC/UnB). Master in International Law and Foreign and International Relations from the European Institute Campus Stellae (Spain). Member of the Brazilian Academy of International Law (ABDI). Associated with the Brazilian Branch of the International Law Association (ILA-Brazil). Associated with Red Espa√Īola de Estudios del Desarrollo (REEDES). Researcher at GEDAI/UFC research group since 2021. Researcher at the Mercosur Research Group since 2008.