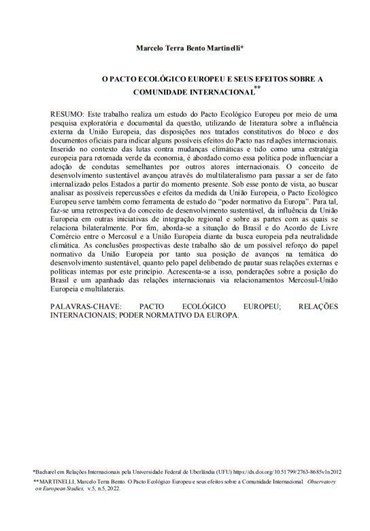 The organizing committee of the āI Monograph Contest For Young Latin American Researchers ā Jean Monnet Awardā, an initiative of the Jean Monnet Network project āBuilding RIghts and Developing KnowledGE between the European Union and Latin-America ā BRIDGE Projectā, co-funded by the Unionās Erasmus+ Program European Union, and the Latin American Center for European Studies is honored to publish the full version of the winning monograph of the I Monograph Contest at the Observatory on European Studies.

The monograph is authored by Marcelo Terra Bento Martinelli from the International Relations course at the Federal University of UberlĆ¢ndia and is entitled O PACTO ECOLĆGICO EUROPEU E SEUS EFEITOS SOBRE A COMUNIDADE INTERNACIONAL.Ā

Marcelo received the prize of 1,000.00 Euros for having been the best classified among the candidates, and part of his work was also published in the form of a scientific article in the 2nd edition of the āLatin American Journal of European Studiesā.